Courtesy of Influenster I received a sample of the new Reveal for men fragrance from Calvin Klein. Even though I am completely down with women using men’s fragrances I decided to have my fiance test this fragrance and give me his opinion along with my own. Two heads, or noses, are better than one right?

My fiance spritzed the scent on his chest, blending it in with his wrists and immediately said “That is strong.” I did not agree as I thought the scent was subtle and did not attack my nostrils like some of the other fragrances he has worn.

“It smells like I have been in the kitchen with an apron on baking cookies all day.” He said next. Coming from him I was surprised because he is not the stereotypical dude and actually does most of our cooking. He then explained that it gave him the feminine vibe from the scent rather than a manly woodsy one. My guess is that his nose was picking up the vanilla a lot more than mine hence the baking cookies comment. 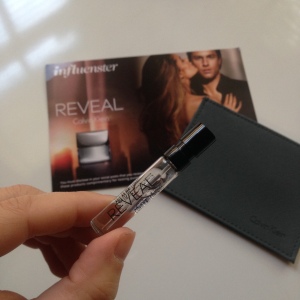 The scent mixed with his natural scent was very appealing. Closing my eyes and smelling it had me imagining him in the woods chopping down half the forrest in order to build me the most magnificent log cabin. Before I could allow myself to daydream further he interrupted by saying again how strong the scent was.

Sadly I do no think this will be a scent I will be purchasing for him. Although I do plan on seeking out the Reveal fragrance for women as I thought the mens scent was luxurious.

Lost Girl received this product(s) complimentary to test and/or review from Influenster.com

The latest news on WordPress.com and the WordPress community.

musings of a frequent flying scientist